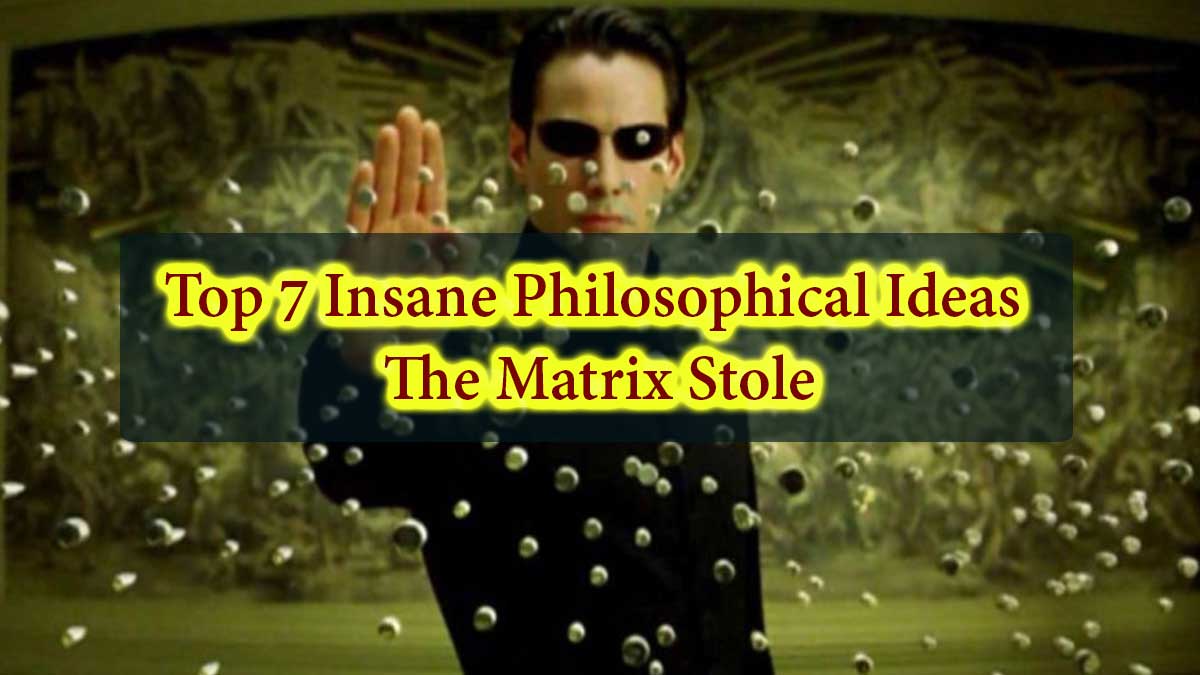 Top 7 Insane Philosophical Ideas The Matrix Stole: When it came out in 1999, The Matrix was a film for the record books.

Here are Top 7 Insane Philosophical Ideas The Matrix Stole used…borrowed…stole (you pick) from other people.

1. Joseph Weizenbaum and the Problem of AI Empathy

Joseph Weizenbaum was the creator of the world’s first chatbot, and it was able to somewhat empathize with humans.

And he also believed this would be disastrous for humankind.

In his 1976 book, Computer Power and Human Reason, Weizenbaum argued that machines should never be trusted to handle delicate decision-making processes because they will always lack the wisdom, intuition, and empathy necessary to do so well.

Cartesian dualism is a philosophical theory in which the universe is divided into two equal and opposite types of existence, called “mind” and “matter.”

Developed by French philosopher Rene Descartes, it’s a direct extension of his philosophy of mind-body dualism. Descartes was obsessed with the point where the body ends and the mind beings.

This problem was the cornerstone of the movie, The Matrix.

Where do the body end and the mind begin? And how can we truly know if we can only think with our minds, and thus, we can only say for certain that our minds exist?

Are We Living In The Matrix? | WIRED

The Simulation Hypothesis, proposed by Swedish philosopher Nick Bostrom, argues that it’s possible that we are living in a computer-simulated world created by an advanced civilization, possibly from the future.

More on this later…

Bostrom demonstrates that it’s more likely that we’re living in a simulated world than a real one right now. One real-world could create as many simulated worlds as it wanted to, as long as it had the technological power to do so, so the odds stack up in favor of this world being simulated.

The implications of this are stunning. The Matrix borrowed heavily from the Simulation Hypothesis when it created its own simulated world. So, how do you know that your entire life isn’t just a computer simulation?

4. Gilbert Harman’s Brain in a Vat

In a thought experiment by philosopher Gilbert Harman, a scientist places a conscious brain in a vat of nutrients and water and makes him believe that he is a brain in a vat.

The scientist then stimulates the vat with electricity and monitors the changes in the person’s mental state. Unbeknownst to the person, the scientist’s intentions are not to study the brain but rather to test the question, “What is it like to be a brain in a vat?”

Constructivism is a theory of knowledge that says that knowledge is constructed by the individual’s interactions with the world.

Knowledge is made up of meanings, which are created by the individual. The individual then assigns meaning to an object or experience that is not already known.

The individual then shares this meaning with others. This creates a social phenomenon constructed by the individual’s interactions with the world.

Constructivism plays a crucial role when Neo joins the rest, and they must learn completely new realities. The laws of physics are totally different in the real world than they were in the simulated world, and the team needs to develop a theory of knowledge together that’s consistent with the real world in order to overcome the Agents.

Bostrom’s work discusses the possibility of an artificial intelligence “breakthrough” that would lead to an intelligence explosion. This would result in the creation of intelligence so powerful that it would be able to control the entire world.

Bostrom says that the risk of artificial intelligence is so great that the best way to prevent it from happening is to have a “control” system.

This system would be a computer that would play the role of the AI. The computer would be so intelligent that it would be able to control the AI and prevent it from taking control of the world.

Plato’s “Allegory of the Cave” comes from his work The Republic. It starts off with a conversation between Socrates and Glaucon where they discuss the idea of how we see the world.

How do we know if the reality we’re experiencing is actually real? Can we use our senses?

Socrates didn’t think so, and he asks us to imagine a cave with people in it who’ve never been outside of it. There’s a fire in the front and a blank wall in the back. On the back wall, shadows are cast using the light from the fire, showing the activity happening outside the cave—but only in shadow.

The people in the cave can only see what is in front of them, and they can only hear the noises of other people. They’re cut off from the world outside the cave and chained to the wall inside the cave.