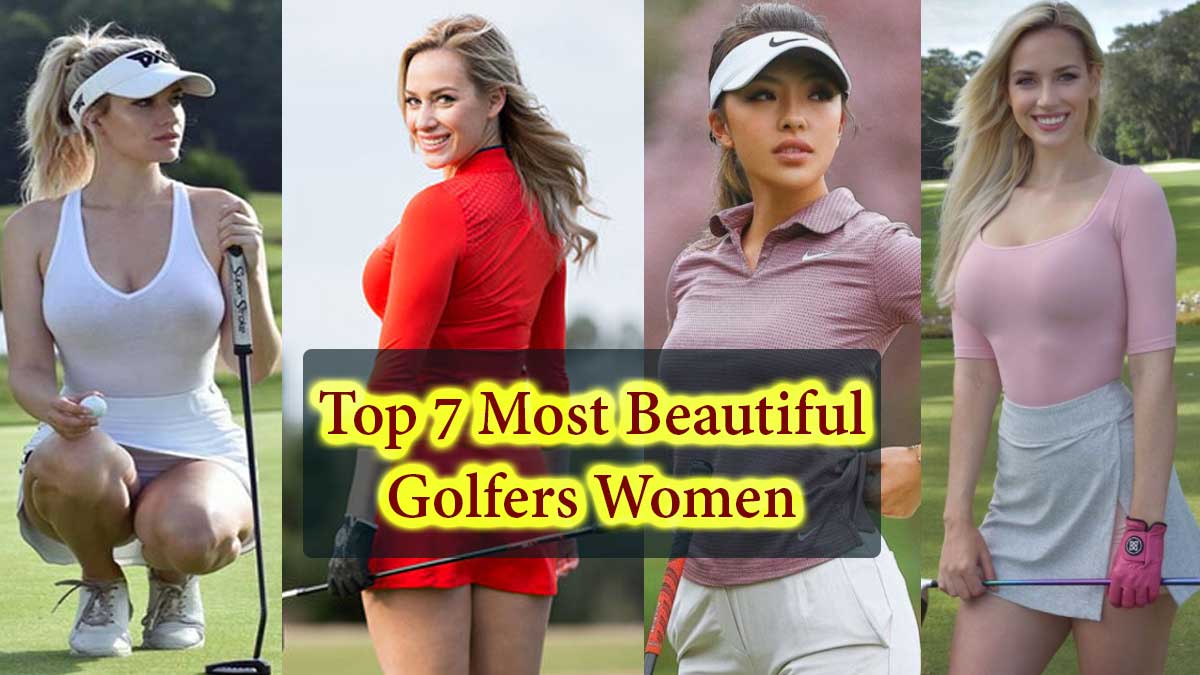 Top 7 Most Beautiful Golfers Women: The game of Golf is universally popular among people and one of the reasons is beautiful and hot female golf players. Many of them have pulled the global attention of the audience when declared among the most beautiful sportswomen in the world. Following the top 7 hottest female golf players are such a perfect example of it. Let’s have a look at the list and tell us your favorite female golfer in the comment section.

The game of golf is one of the most expensive games, jixo is often played by only rich people. Even its goods are also very expensive. There are many such players all over the world who stunned everyone with their superb performances. There are many female players in this episode who are very beautiful in appearance.

Lucy Robson is a beautiful female golfer who comes from Britain and now resides in Florida. She has shot to prominence and become and Instagram influencer for female golf with her jaw dropping good looks an impeccable golf skills.

Blair O’Neal has been touching the golf green since the age of 11, taking part in competitions all around the globe. She was born on 14 May 1981 in Macomb, United States. She played golf in her college for 4 years and then played golf as a professional for 10 years along with pursuing her modeling career.

She is also a writer, journalist, and sportscaster besides a beautiful female golfer. She was born on 3 March 1987 in Marysville, Ohio, United States.

Holly was a collegiate golf player in 2009 and finally got her achievement at Golf Channel in the Sports Media industry. In 2007, because of her, the Spartans had a big achievement and they were the winners of the Big Ten Women’s Golf Championship. She became a star on the Golf Channel because of her famous works on Morning Drive and Golf School.

Unfortunately, at the age of 20 because of knee surgery, she could not continue her golf professional career. Besides her profession, she remains trending because of her hot photoshoots and videos on social media.

Muni “Lily” He is a Chinese professional golfer who plays on the U.S.-based LPGA Tour.

As an amateur, she won the 2015 Polo Junior Classic and the 2017 Minnesota Invitational. She had four starts on the LPGA Tour and made the cut at the 2015 U.S. Women’s Open where she tied for 53rd place. She turned professional in December 2017 and claimed her first Symetra Tour win in July 2018 at the inaugural Prasco Charity Championship in Maineville, Ohio. In November 2019, she won the eight-round LPGA Q-Series to secure her 2020 LPGA Tour membership. She has signed endorsement deals with Nike and WeChat.

She is currently in a relationship with Formula One driver Alex Albon.

Beatriz Recari Eransus is a Spanish professional golfer on the U.S.-based LPGA Tour and the Ladies European Tour.

Recari began dating Andreas Thorp, her caddie, in 2008. Their relationship ended in 2018.

Belén Mozo is a Spanish professional golfer who plays on the LPGA Tour and the Ladies European Tour. As an amateur, Mozo won the British Ladies Amateur Golf Championship in 2006. Later that year she joined the USC Trojans golf team.

Sharmila Nicollet is an Indian-French female golf player. He started playing golf at the age of 11. In 2009, she became a professional golfer. Due to her glamorous look, she was included in the list of the hottest female golfers in the world. For your information, let me tell you that he has more than 250k followers on Instagram. Because of her beaultifull looks, the number of her fans is increasing continuously.

Charley Esmee Hull is an English professional golfer who has achieved success both on the Ladies European Tour and the LPGA Tour, winning honours as Rookie of the Year, becoming the youngest competitor to participate in the international Solheim Cup matches and becoming a champion on the European circuit in 2014 before the age of 18. In 2016, she won the prestigious CME Group Tour Championship, the season-ending event of the LPGA Tour.

Hottest Female Golfer: Belén Mozo is a Spanish professional golfer who plays on the LPGA Tour and the Ladies European Tour. As an amateur, Mozo won the British Ladies Amateur Golf Championship in 2006. Later that year she joined the USC Trojans golf team.

Most Famous and Hot Footballers Girlfriends

Beautiful Sports Women in the World

Top 7 Beautiful Sports Women in the World: This is my personal selection of the TOP 7 most beautiful women in sports. Take this as you may, but I’m extremely excited about this and it should be a great list.
Brittney Palmer
Alana Blanchard
Alex Morgan… read More

7 Hottest Female Athletes of All Time