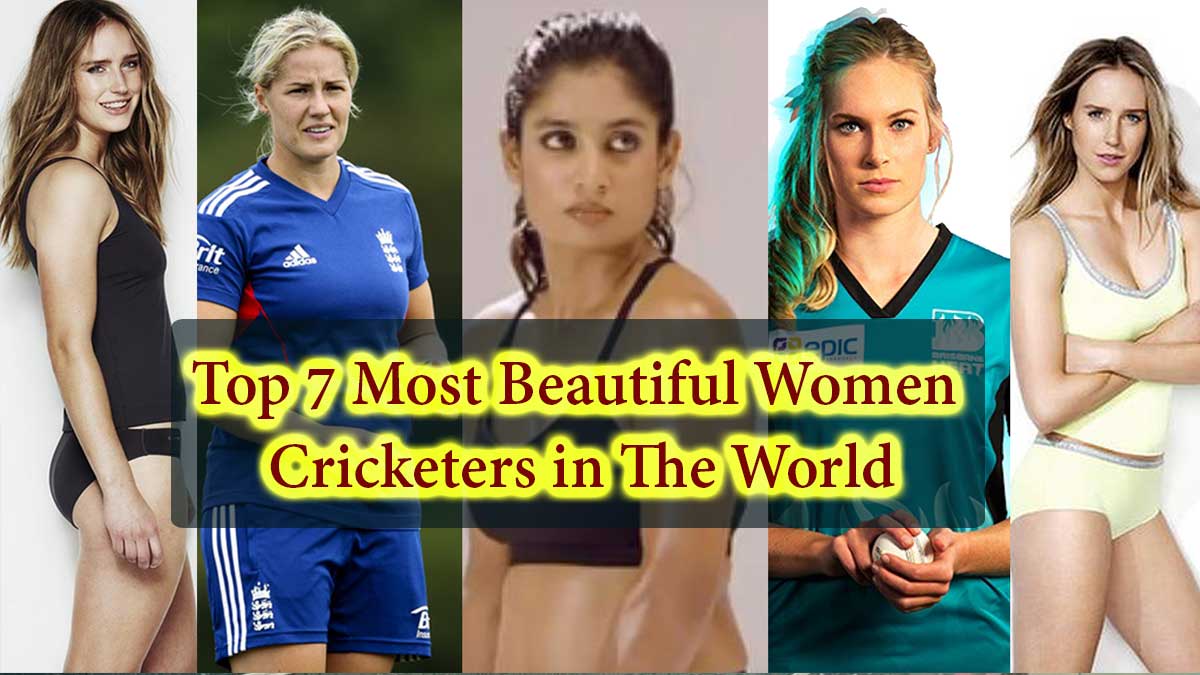 Most Beautiful Women Cricketers in The World: When the women’s play on the field, apart from a good game, you also get to see a lot of beauty scattered on the ground. Along with excellent playing skills, these players are gorgeous and beautiful.

In this article, there are top 15 most beautiful and hottest women cricketers in the world at present. It was very difficult to choose a few girls out of so many beauties. However, here are the best of the bests.

Perry is a talented and pretty that can attract anyone with her awesome looks and incredible beauty. It looks like she has a tremendous career ahead and will not look back from where she is now.

Brunt is a talented right arm fast bowler who is known for two things, i.e. aggressive behavior and extensive beauty. Born on 2 July 1985, she was named the England women’s cricketer of the year two times in her career. Katherine is pretty much popular among her fans for a classic action and currently, plays for the England women’s team.

She plays for the Perth Scorchers in Australian Big Bash League and Yorkshire in England’s domestic competition.

Without any doubt, Sarah Taylor is one of the most beautiful women cricketers in the world right now. She is popular for her free-flowing strokes on the field and opens the batting in ODIs. This gorgeous cricketer becomes the youngest female cricketer to score 1,000 runs in the ODI format.

Holly Ferling is a very beautiful and talented cricketer who made her debut in 2013 at the young age of just 17 years. Presently, she is a part of the Australian cricket team and played as their lead fast bowler. Presently, she plays for the Queensland Cricket and Brisbane Heat in the Australian domestic cricket.

As stated by the majority of the legends, she has a tremendous future ahead. Along with brilliant fast bowling skills, Ferling is one of the most beautiful female cricketers in the world right now.

She is also very beautiful having a curvy body that can clean bold anyone. Joyce plays as the right-handed batsman and left-arm medium pace bowler in the Irish team.

Another beautiful and incredible bowler that hails from England, Laura Marsh is popular as one of the best spinners in the women’s cricket. She can stump any man with her incredible beauty on any day. She started her career as a medium pace bowler, but get the real success by switching to off-spin.

Marsh is one of the first tranches of ECB central contracts for women players that were announced in 2014. She got her sports science management degree at the Loughborough University.

Sana Mir is not a beautiful woman cricketer, but also a true inspiration for bringing back the women’s cricket back in Pakistan. She has set an example, among the young females in their country. Born on 5 January 1986, Sana is the captain of the Pakistani national team.

Some of the Mir’s favorite players are Jonty Rhodes, Imran Khan, and Waqar Younis. She is the first female player who receives the award of the PCB Woman Cricketer of the year in 2013.

Rosalie Birch is an English cricketer who is known for her unique beauty and incredible spin bowling. Additionally, she also plays like a lower middle-order batsman for her team. Since her debut, Birch has played for England in 7 Test matches, 4 WT20I, and 37 WODI.

She was graduated with a BA in Linguistics from the University of Sussex in 2006.

Sara McGlashan is a beautiful New Zealand cricketer who is a sister of the Peter McGlashan, a former cricketer played for New Zealand in T20s and ODIs. Along with playing for her national side, she also played for the domestic teams, such as Sydney Sixers, ACT Meteors, and Auckland Hearts.

She is a right-handed batsman who played as a wicket-keeper for her team. Born on 28 March 1982, Sara is one of the most beautiful players who ever stepped into the cricketing ground.

Trisha Chetty is a South African cricketer who made her debut in 2007 against Pakistan. She is a member of the present squad who is playing for South Africa in the World Cup 2017. Along with being an explosive opener for her team, she is popular for her incredible looks. Moreover, you can see signboards written marry me Trisha on the grounds whenever she plays for her team.

She has set a record for the highest-ever opening stand of 170 runs with the Shandre Fritz in the WT20 history.

Mithali Raj is India’s leading run scorer in the One-day format and captain of the national cricket team. Born in December 1982 in Jodhpur, Rajasthan, she had made her debut at the age of 17 in 1999. Raj plays for India in both tests as well as one-day internationals and soon on her way to becoming the first woman cricketer to make 6,000 runs in one-day internationals.

This beautiful lady also led the Indian cricket team to the world cup finals in 2005. The list of Mithali’s achievements is very long and that’s why she is popular as Sachin Tendulkar of women’s cricket.

Most Indian cricket fans know her from her stint as an expert on T20 Extra Innings on Set Max. This hottie of Indian origin plied her trade for England for almost a decade before she retired from international cricket earlier this year. Isa Guha is a cricketer who plays for England team. Isa Guha is a right arm fast medium bowler.

She made her Test debut at the age of 17 against India in 2002. Isa Guha was named BBC Asian Network Sports Personality of the Year in the same year. Her best bowling in 44 One Day Internationals that she played is the 5/22 which she took against New Zealand. UK Cricketer Isa Guha was number one One-Day bowler during 2008-09.

She took a career-best 5/40 in her seventh Test match, against Australia in Bowral in 2008. She finished up with a total of nine wickets in that match. England Cricketer Isa Guha announced her retirement from international cricket on 9 March 2012, although she continues to play county cricket for Berkshire. Guha also writes a column for the BBC Sports website. She joined ITV Sport in April 2012 as a co-presenter in the coverage of the Indian Premier League.

Du Preez is the captain of the Momentum Proteas. She started playing cricket at the age of four, getting her introduction through the KFC Mini-Cricket programme. Mignon du Preez also has national colors in indoor and action cricket, as well as softball. She also has provincial colors (Northern) for hockey, tumbling and table tennis. Her favorite cricketers are Sachin Tendulkar and Jonty Rhodes.

She is a B.Comm Honours in Marketing graduate. Enjoys spending time with her family, friends, and boyfriend Tony when she has free time. Wicket-keeper batsman Mignon du Preez made her debut for the South African women’s cricket team at the age of 17 in 2007.

14. Meghann Moira Lanning, Australia – Who is the most beautiful cricketer in women’s cricket?

She is one of the top-notch players in the current Australian Cricket team. Her killer looks and her impeccable style has garnered her a lot of appreciation even off fields.

15. Smriti Mandhana, India – 15 most beautiful women cricketers in the world

The bespectacled teenager gave up science in school, and a probable career in hospitality, and has no regrets whatsoever. After all, she is only the second Indian cricketer to feature in a foreign T20 league, has a World Cup century against her name, another one in Australia, a double ton in the domestic one-day competition.

All at the age of 20! As a nine-year-old, Mandhana signed up for cricket trials for fun. She’d accompanied her older brother for enough of those sessions to pick up left-handed batting even though she is otherwise right-handed.

Frequently Asked Question (FAQ) – Who is the most beautiful cricketer in women’s cricket? – Top 7 Most Beautiful Women Cricketers in The World

Who is the hottest women cricketer in the world?

Who’s the 7 most beautiful woman in the world?

Which country girl is most beautiful?