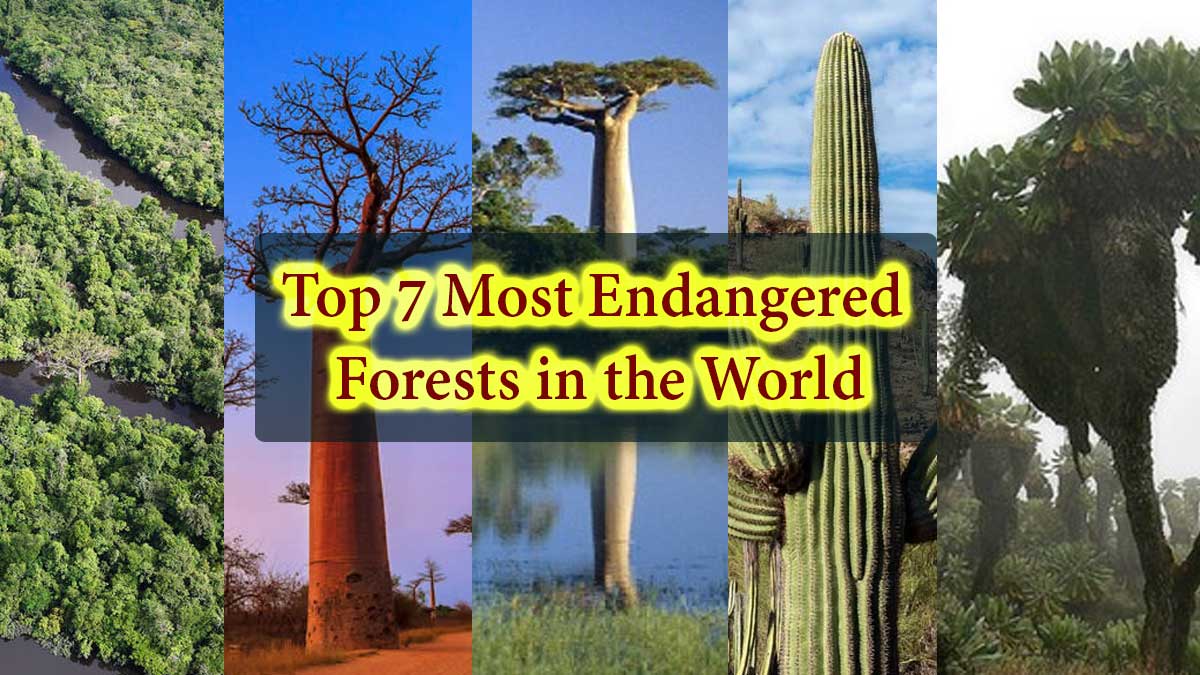 Most Endangered Forests in the World: Forests are the home to 80% of our terrestrial biodiversity.

From flora to fauna, a wide range of known and unknown species reside within the foliage which cover only 30% of the world, besides providing resources to 1.6 billion people, alongside fulfilling the basic needs for the creatures on earth.

Unfortunately, our forests are on the verge of collapsing. Many factors contribute to the rapid destruction of forests, much of which is man-made.

Located along the eastern edge of Africa, from Saudi Arabia in the north to Zimbabwe in the south, the Eastern Afromontane is home to flora like Podocarpus, Juniperus, bamboo, Hagenia, etc. Essentially, it consists of tropical, subtropical moist broadleaf forests, montane grasslands and shrublands. It also harbours a variety of mammals, birds, and amphibians, with 617 fishes in the lakes.

The Coastal Forests of Eastern Africa Biodiversity Hotspot stretches along the eastern edge of Africa and includes parts of Somalia, Kenya, Tanzania and Mozambique. All islands lying immediately offshore are also part of the hotspot—Pemba, Zanzibar, Mafia and the Bazaruto Archipelago among them.

The Mountains of Southwest China Biodiversity Hotspot, which stretches from southeast Tibet through western Sichuan and extends into central and northern Yunnan, is the most botanically rich temperate forest ecosystem in the world. Rapid elevation changes of more than 6,000 meter between ridge tops and river valleys support a complete spectrum of vegetation types.

The Atlantic Forest (Portuguese: Mata Atlântica) is a South American forest that extends along the Atlantic coast of Brazil from Rio Grande do Norte state in the northeast to Rio Grande do Sul state in the south and inland as far as Paraguay and the Misiones Province of Argentina, where the region is known as Selva …

The Philippines hotspot spread across more than 7,100 islands. Over 6,000 plant species can be counted in the tropical and subtropical moist broadleaf forests, and there are many bird species like the Philippine eagle, the second-largest eagle in the world, as well as amphibian species like the panther flying frog with adaptations for gliding, such as extra skin flap and webbed fingers and toes, etc., found here.

New Caledonia is a French territory comprising dozens of islands in the South Pacific. It’s known for its palm-lined beaches and marine-life-rich lagoon, which, at 24,000-sq.-km, is among the world’s largest. A massive barrier reef surrounds the main island, Grand Terre, a major scuba-diving destination. The capital, Nouméa, is home to French-influenced restaurants and luxury boutiques selling Parisian fashions.

The Indo-Burma hotspots in the Asia-Pacific region, with tropical and subtropical moist broadleaf forests, have birds, freshwater turtles and fish species, including some of the world’s largest ones. Aquatic ecosystems comprise giant catfish and Jullien’s golden carp. While draining for wet rice cultivation destroy freshwater floodplain swamps and wetlands, dams flood sandbars and other habitats of fauna.

10 of the world’s most threatened forests

The Amazon, central Africa, the Mekong. These are home to some of the world’s most species-rich, culturally significant and stunningly beautiful forests. But large segments of these forests, and many others around , may not be there in 15 years if we don’t do more to save them.

What are the most endangered forests in the world?

What are the 10 most endangered trees?

Which is the rarest tree in the world?

Pennantia baylisiana—aka the Three Kings Kaikomako—is the rarest species of tree in the world. There is only one remaining species in the wild, on Three Kings Islands in New Zealand. The species was decimated by goats in the countryside, which were removed from its vicinity for conservation efforts.