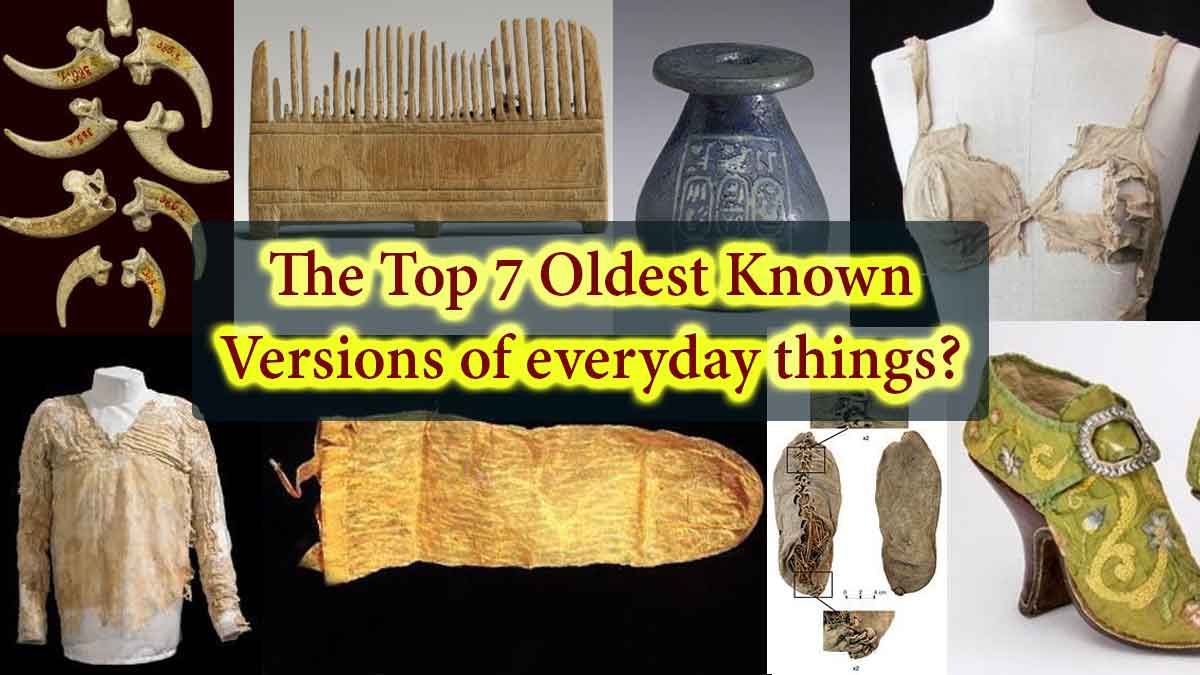 The Top 7 Oldest Known Versions of everyday things?: Humans have been mucking about inventing things for thousands of years, and many of the items we take for granted today were actually invented long ago. That includes shoes, musical instruments, money, and plenty more.

Looking back over the millennia, it’s interesting to see when things pop up in the archaeological record. Odds are, many of these items you’re familiar with were created much further back in history than you previously thought.

List of The Top 7 Oldest Known Versions of everyday things?

Researchers now say they have early undergarments supporting the claim that the modern-day bra may actually have its roots in the Middle Ages.

Austrian archeologists at the University of Innsbruck said Wednesday that the brassieres date from the 1400s. That makes their use far earlier than previously thought. Until now, historians had documented early examples of bras back to the 1800s.

“We didn’t believe it ourselves,” Beatrix Nutz, the archaeologist responsible for the discovery, told The Associated Press. “From what we knew, there was no such thing as bra-like garments in the 15th century.”

The four linen bras, discovered in an Austrian castle, were decorated with lace, according to reports, an extra frill indicating they were meant to be enjoyed by other people’s prying eyes.

First perfumes: Ancient Egypt, est. 3000 B.C., most common perfumes were Susinum (a perfume based on lily, myrrh, cinnamon), Cyprinum (based upon henna, cardamom, cinnamon, myrrh and southernwood) and Mendesian (myrrh and cassia with assorted gums and resins).

Ancient Egypt, 1500 B.C., made from wood, ivory or fish bone. (Oldest date back to 5000 B.C.), You will be surprised to know that the history or use of hair combs dates as 5,000 years ago! Combs are actually among the oldest tools found by archaeologists. As early as 5500 B.C. the ancient Egyptians carved out combs among other remnants of the emerging cultures.

Croatian Neanderthal Jewelry, 135,000 Years Ago, made from bone.

The widely-held vision of Neanderthals as brutes may need a stark rethink after research found they crafted the world’s earliest jewellery from eagle talons 135,000 years ago, long before modern humans appeared in Europe.

These include kilts, skirts, cloaks, shawls, and some dresses. Men might wear aprons — pieces of cloth attached to a belt or band around the waist. Kilts and skirts might be so short that they covered just the hips, or long enough to run from chest to ankles.

England, Sweden, 16th-17th century, made from animal intestines to protect from STDs.

The first documented use of a condom in Europe was in 1564 by the anatomist Fallopia (who also gave his name to fallopian tubes). In the 16th century condoms were used primarily to prevent STDs. Syphilis, for example, was often fatal and raged through Europe for over 300 years.

The first toothbrush was made in Ancient China some time during the Tang Dynasty (619-907 AD). These first toothbrushes consisted of a bamboo or bone handle. The bristles were made from the coarse hairs of a Siberian hog.

Also Read:- Top 10 Hairstyles for Girls that are Trends 2022

The Areni-1 shoe is a 5,500-year-old leather shoe that was found in 2008 in excellent condition in the Areni-1 cave located in the Vayots Dzor province of Armenia. It is a one-piece leather-hide shoe, the oldest piece of leather footwear in the world known to contemporary researchers.

Women did not begin wearing heels until the mid-1500’s. The first recorded high heel on a woman was worn by Catherine de Medici.

Ancient Sumerian men and women were possibly the first to invent and wear lipstick, about 5,000 years ago.

The first commercially produced lipstick was invented in 1884 by French perfumers. This lipstick was formulated from a combination of deer tallow, castor oil, and beeswax. At this time, lipstick was not sold in the metal or plastic tubes we know today.

Note: I listed 7 interesting objects but I am not sure they are the oldest known versions since I couldn’t find photos of oldest registrations. (I interpreted “known” as the ones documented in photos.) If someone has photos of earliest versions of these objects I will gladly edit. Thank you!

What is the oldest item in history?

Jack Hills Zircon: The zircon crystals from Australia’s Jack Hills are believed to be the oldest thing ever discovered on Earth. Researchers have dated the crystals to about 4.375 billion years ago, just 165 million years after the Earth formed.

What is the oldest piece of history we have?

The Epic of Gilgamesh started out as a series of Sumerian poems and tales dating back to 2100 B.C., but the most complete version was written around the 12th century B.C. by the Babylonians