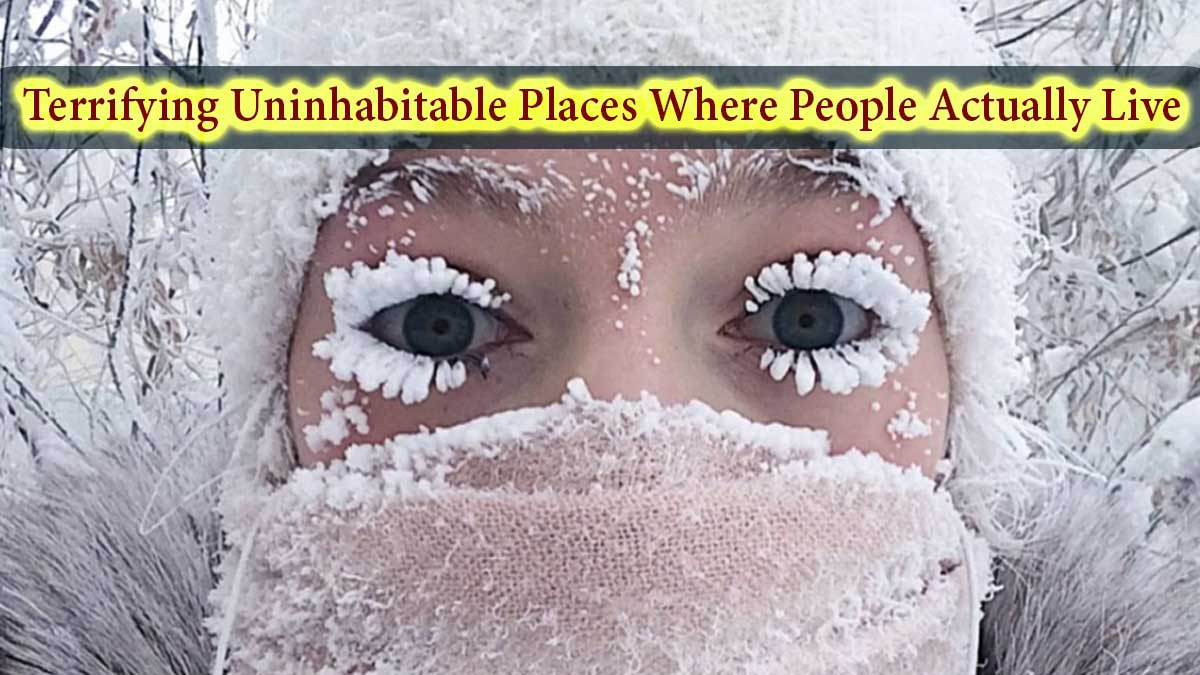 Terrifying Uninhabitable Places Where People Actually Live: Today we are looking at some of the most dangerous and wildest places people actually chose to live.

From the coldest places on earth to the hottest, and others infested with polar bears,

Svalbard is a Norwegian archipelago between mainland Norway and the North Pole. One of the world’s northernmost inhabited areas, it’s known for its rugged, remote terrain of glaciers and frozen tundra sheltering polar bears, Svalbard reindeer and Arctic foxes.

The Northern Lights are visible during winter, and summer brings the “midnight sun”—sunlight 24 hours a day.

Coober Pedy is a town in northern South Australia, 846 km north of Adelaide on the Stuart Highway. The town is sometimes referred to as the “opal capital of the world” because of the quantity of precious opals that are mined there.

Oymyakon is a rural locality in Oymyakonsky District of the Sakha Republic, Russia, located in the Yana-Oymyakon Highlands, along the Indigirka River, 30 km northwest of Tomtor on the Kolyma Highway. By winter average temperatures, it is the coldest permanently inhabited settlement on Earth.

Also Read:- Top 10 Hairstyles for Girls that are Trends 2022

The Tibetan Plateau, also known as the Qinghai–Tibet Plateau or the Qing–Zang Plateau or as the Himalayan Plateau in India, is a vast elevated plateau in Central Asia, South Asia and East Asia, covering

Lake Nyos is a crater lake in the Northwest Region of Cameroon, located about 315 km northwest of Yaoundé, the capital. Nyos is a deep lake high on the flank of an inactive volcano in the Oku volcanic plain along the Cameroon line of volcanic activity. A volcanic dam impounds the lake waters.

6. The Atacama Desert in Chile

The Atacama Desert is a desert plateau in South America covering a 1,600 km strip of land on the Pacific coast, west of the Andes Mountains.

Dallol is a locality in the Dallol woreda of northern Ethiopia. Located in Administrative Zone 2 of the Afar Region in the Afar Depression, it has a latitude and longitude of 14°14′19″N 40°17′38″E with an elevation of about 130 metres below sea level.

Zabol is a city and capital of Zabol County, Sistan and Baluchestan Province, Iran. The Zabol is near the border with Afghanistan. Referred to as Sistan until the late 1920s, the city was renamed Zabol by Reza Shah Pahlavi. At the 2006 census, its population was 130,642, in 27,867 families.

Migingo is a 2,000-square-metre island in Kenya on Lake Victoria. The island was the center of a low-level territorial dispute between Kenya and Uganda and is extremely densely populated.

The beach is a sandy beach about 700 metres long between St Kilda Marina and St Kilda Harbour along Jacka Boulevard and St Kilda Esplanade.

From high places, to hot places, to places that are full of toxic fumes. Some of these places are toxic to everything living, but some people refuse to leave or to stop visiting. Let’s talk about the Top 20 Terrifying Uninhabitable Places Where People Actually Live

The Spratly Islands are a disputed archipelago in the South China Sea. Composed of islands, islets, cays, and more than 100 reefs, sometimes grouped in submerged old atolls, the archipelago lies off the coasts of the Philippines, Malaysia, and southern Vietnam.

The Kerguelen Islands, also known as the Desolation Islands, are a group of islands in the sub-Antarctic constituting one of the two exposed parts of the Kerguelen Plateau, a large igneous province mostly submerged in the southern Indian Ocean.

Surtsey is a volcanic island located in the Vestmannaeyjar archipelago off the southern coast of Iceland. At 63.303°N 20.605°W Surtsey is the southernmost point of Iceland. It was formed in a volcanic eruption which began 130 metres below sea level, and reached the surface on 14 November 1963.

14. Centralia – Town in Pennsylvania – US

Centralia is a borough and near-ghost town in Columbia County, Pennsylvania, United States. Its population has declined from 1,000 in 1980 to 5 residents in 2017 because a coal mine fire has been burning beneath the borough since 1962.

Mêdog, or Metok, or Motuo County, also known as Pemako, is a county as well as a traditional region of the prefecture-level city of Nyingchi in the Tibet Autonomous Region of the People’s Republic of China.

Kabwe is the capital of the Zambian Central Province with a population estimated at 202,914 at the 2010 census. Named Broken Hill until 1966, it was founded when lead and zinc deposits were discovered in 1902.

The Amundsen–Scott South Pole Station is the United States scientific research station at the South Pole of the Earth. It is the southernmost point under the jurisdiction of the United States. The station is located on the high plateau of Antarctica at 2,835 metres above sea level.

Longyearbyen is a small coal-mining town on Spitsbergen Island, in Norway’s Svalbard archipelago. This Arctic town is known for its views of the Northern Lights.

The modern Svalbard Museum chronicles the region’s natural and cultural history. It includes a stuffed polar bear. Live bears can occasionally be seen in the area.

La Oroya is a city on the River Mantaro in central Peru. It is situated on the Andes some 176 km east-north-east of the national capital, Lima, and is capital of the Yauli Province.

Most uninhabitable places on Earth

Scariest places in the ocean

Which portion of the world is uninhabited?

It has an area of 1,295,000 km square and a population of 57200. Therefore the correct answer is Option A: Antarctica. Note: It must be noted that while Antarctica has no permanent residents, it is not unoccupied all year round.