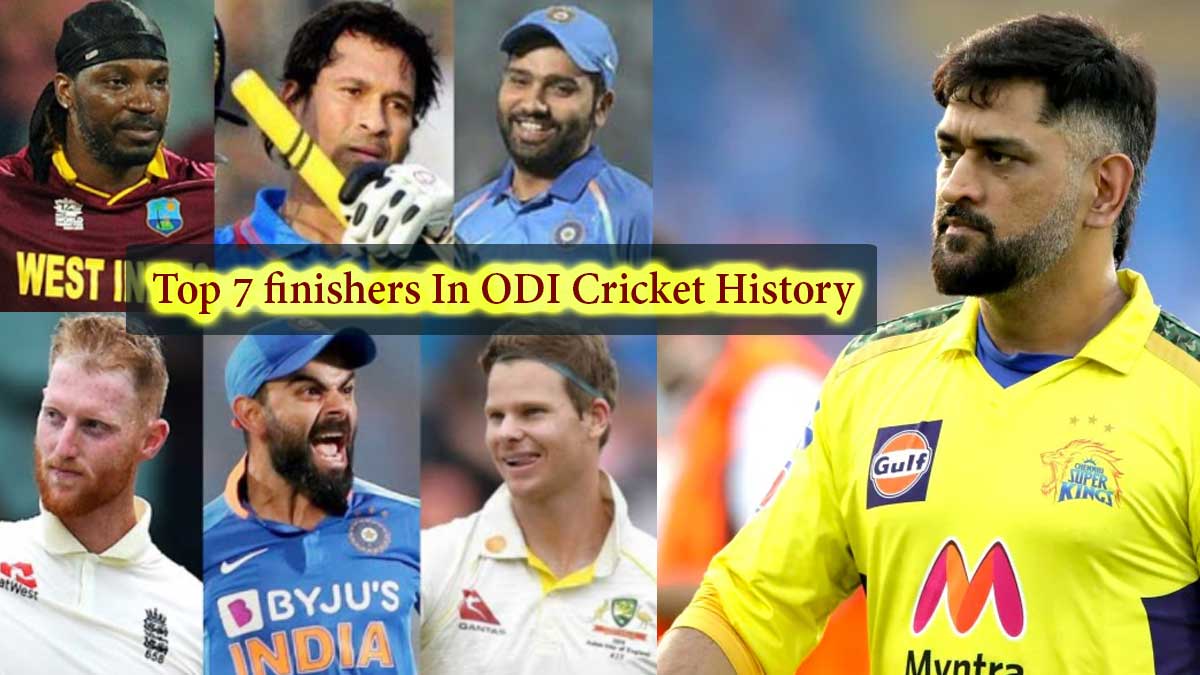 Who are the top 7 finishers in ODI Cricket?

Top 7 finishers In ODI Cricket History: Some ODIs go down the wire like they were scripted to give the gods some thrill. These need nothing less than extraordinary performances from cricketing gods to pull off. ODI heists usually reveal nerves of steel and unflinching courage to take all the right calls on the ground.

Every team, therefore, bets big on finishers, cricketers who come to the party in crunch situations. These are the cricketers that teams rely on to have their back, cricketers who never shy away from scrap or dogfight.

But, how do you pick the top finishers of all time in ODIs? Are these the guys, who have stacked up to the not outs over the years, making sure, they are there taking the team over the line. Are these the guys who have super-human averages? these the batsmen who have scored a lot of runs in chases or with tailenders?

The answer though comes as a combination. However, since finishing is a niche business, the author has given more priority to not-outs as opposed to averages in wins, which are lower for Steve Waugh and Boucher, although their innings are worth their weight in gold.

Mind you, we are leaving out players like Virat Kohli and AB de Villiers out of the list, although they have all the makings of owning this list half a decade from now.

1. MS Dhoni – Indian Cricketer – One of the finishers In ODI Cricket History

Mahendra Singh Dhoni, was a former international cricketer who plays as a wicketkeeper and a right-handed middle order batsman. His power hitting ability made his reputation as a finisher. He captained the Indian national cricket team in limited-overs formats from 2007 to 2017 and in Test cricket from 2008 to 2014.

Michael Gwyl Bevan is a former Australian cricketer. He is a left-handed batsman and a slow left arm wrist-spin bowler. Michael has been credited for initiating the art of finishing matches. He was an Australian Cricket Academy scholarship holder in 1989.

Sir Isaac Vivian Alexander Richards KNH, OBE is an Antiguan retired cricketer who represented the West Indies cricket team between 1974 and 1991. Batting generally at number three in a dominant West Indies side, Richards is widely regarded as one of the greatest batsmen of all time.

Stephen Rodger Waugh AO is an Australian former international cricketer and twin brother of cricketer Mark Waugh. A right-handed batsman, he was also a medium-pace bowler.

Deshamanya Arjuna Ranatunga, is a former Sri Lankan cricketer and 1996 Cricket World Cup winning captain for Sri Lanka. He is regarded as the pioneer who lifted the Sri Lankan cricket team from underdog status to a leading force in the cricketing world.

Mark Verdon Boucher is a South African cricket coach and former cricketer who played all three formats of the game. Boucher is regarded as one of the best wicket-keeper batsmen of all time, and holds the record for the most Test dismissals by a wicket-keeper, with 532 catches and 555 total dismissals.

Who is best finisher in cricket history?

Dhoni played in 112 successful run chases during his ODI career. Averaging 91.28, he totaled 2556 runs and made 19 half-centuries and one hundred and is regarded as the best finisher in cricket.

Who’s God of finisher in cricket?

MS Dhoni, the name is enough to know who is the best cricket finisher in the world. His numbers might not be the best, but that is because his style of game is very unique. He likes to take the game very deep and then hit the big boundaries that win matches.