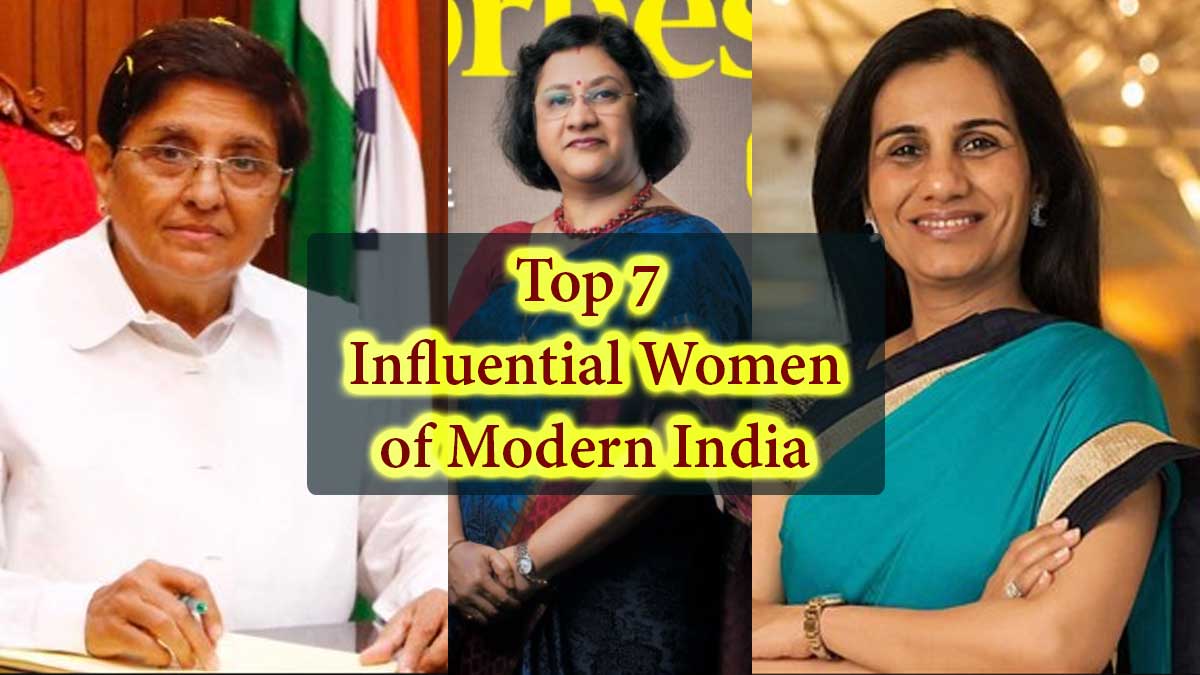 Top 7 Influential Women of Modern India: Indian women have always been perceived by the world as the quiet, docile kind of women, with long hair, clad in a saree with lots of gold jewellery, who like to be inside the house, and enjoy taking care of their families.

But, in every generation, some woman or the other has always broken the stereotypes, and proven herself to be strong, independent and multi-faceted.

While, the Queen of Jhansi, Rani Lakshmi Bai, led an entire army and died in battle, she was also a great cook at home, and took care of the huge castle library.

March 8 is annually celebrated as International Women’s Day around the world, as the global observance aims to draw attention and support to women’s equality and drive gender parity through collective efforts across the globe.

Celebrated since 1911, the international day devoted to women’s causes proves an ideal occasion to acknowledge and hail women’s achievements in various spheres of life and offer global solidary and collective support to inspire women in empowering themselves and aspiring towards gender equality.

Medha Patkar is an Indian social activist working on various crucial political and economic issues raised by tribals, dalits, farmers, labourers and women facing injustice in India. She is an alumnus of TISS, a premier institute of social science research in India.

Tessy Thomas is an Indian scientist and Director General of Aeronautical Systems and the former Project Director for Agni-IV missile in Defence Research and Development Organisation. She is the first ever woman scientist to head a missile project in India.

Kiran Bedi is the first woman in India to join the officer ranks of the Indian Police Service, social activist and tennis player, who was the 24th Lieutenant Governor of Puducherry from 28 May 2016 to 16 February 2021.

Chitra Ramkrishna is the former chief executive officer of the National Stock Exchange, an institution founded in the early 1990s to reform the capital market in India, and now ranking as the world’s largest exchange in cash market trades and as one of the top three exchanges in index and stock derivatives.

Nirupama Menon Rao is a retired civil servant of 1973 batch Indian Foreign Service cadre who served as India’s Foreign Secretary from 2009 to 2011, as well as being India’s Ambassador to the United States, China and Sri Lanka during her career.

Chanda Kochhar is the former managing director and chief executive officer of ICICI Bank. She, embroiled in a case of conflict of interest, stepped down from her position in 2018. Subsequently, she was sacked by ICICI Bank – a decision which was later upheld by the Supreme Court of India.

Who is the most important women in India?

Nirmala Sitharaman is an Indian economist and politician serving as the current Minister of Finance and Corporate Affairs of India. She is a member of the Rajya Sabha, upper house of the Indian Parliament, since 2014.

Who is the best girl in India?