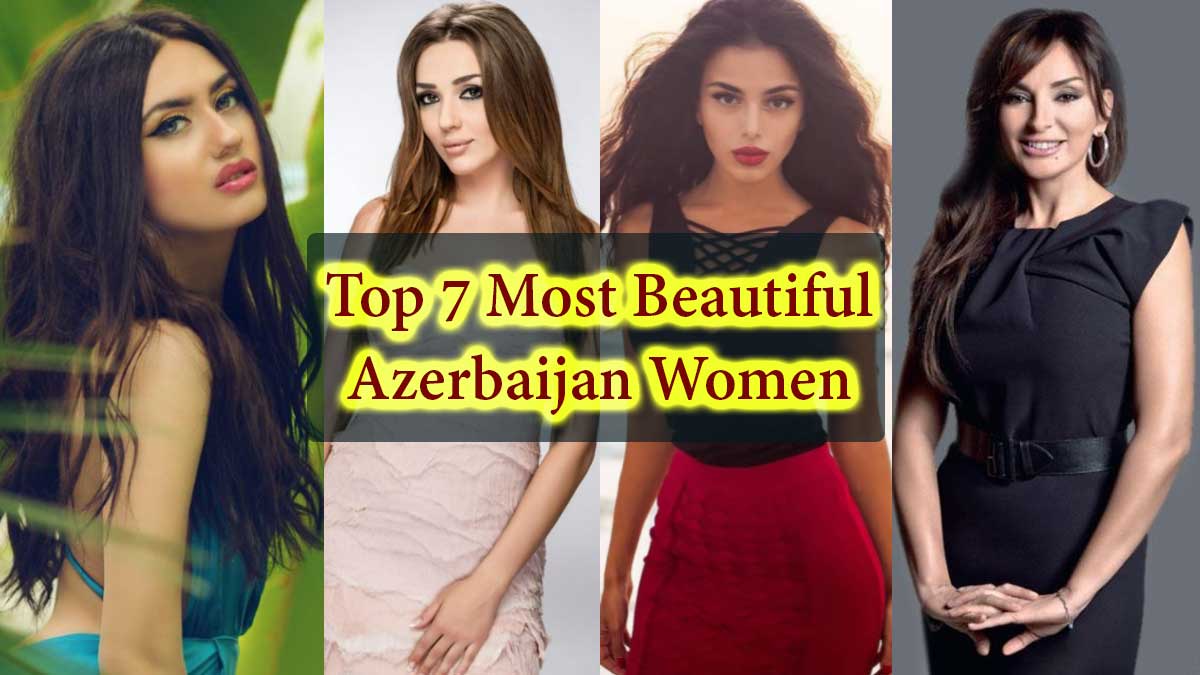 Top 7 Most Beautiful Azerbaijan Women: All over the world, Azerbaija women are known to be the sweetest and sexiest women on the planet, and this list will show that this last statement is absolutely accurate.

Like women from other parts of the world, Azerbaijan women are also quite passionate and caring. But one outstanding quality of these women is that they age quite well, you may not be able to tell the age of some very old women. So let’s quickly move on to the list of the 7 most beautiful Azerbaijan women.

Javidan Gurbanova (Azerbaijani: Cavidan Qurbanova, born on 1 November 1990 in Baku) is an Azerbaijani model and beauty pageant titleholder who was crowned Miss Azerbaijan 2014 and scheduled to represent her country at the Miss Universe 2015 pageant but failed after an accident in September.

Gurbanova graduated from Baku State University. She works in sales and consulting while she is the reigning Miss Azerbaijan 2014. In 2014, she was crowned as Miss Bahar 2014 and competed at the Miss Azerbaijan beauty pageant in Baku.

Aysel Manafova is an Azerbaijani model and beauty pageant titleholder and fashion model who was crowned Miss Azerbaijan in 2012. She represented her country at Miss Universe 2013 on 9 November 2013 in Moscow, Russia.

Aysel works as a model in Baku.

She is deeply passionate about gymnastics, horseback riding, swimming and volunteering for various causes, like the Society for Stray Animals Protection.

Raziyat Aliyeva studied at the Western University of Baku, then continued her studies abroad. In 2017 she won Miss Azerbaijan beauty contest. Nowadays, Raziyat is the ambassador of many Azerbaijani brands, participates in fashion shows and cooperates with foreign designers. She also works as a TV host.

Semra Huseynova is a model and winner of Miss Azerbaijan 2019. She worked at the Baku Academy of Arts. For a long time, she worked in Moscow, Turkey, cooperated with world brands and took part in many fashion shows, but due to a pandemic and illness (anorexia) she returned to Azerbaijan. A favorite animal is a cat.

Semra Huseynova was born on August 3, 1992, in the Azerbaijani city of Sumgait. In 1999–2009 she studied at the Sumgait secondary school No.12. In 2009–2013 she was a student of the faculty of television directors of the Azerbaijan State University of Culture and Art.

Ogulbahar is an international model from Azerbaijan. She participates in different fashion shows around the world. Ogulbahar recently participated in the Miss FashionTV 2019.

Ramina Abbasova was born in Baku. Since the age of 18, she has been engaged in art. In 2016, Ramina was invited for Victoria’s Secret brand photoshoot to present the world-famous brand in Baku. After that, Ramina received many offers from Turkish brands. She tries herself as a singer, and in 2019 music video featuring Ramina gained 4 million views on YouTube.

Umleyla is the Azerbaijani model. She actively participates in fashion shows of Baku, photoshoots for magazines and advertisements. Umleyla’s photos were in L’officiel Magazine and Nargis Mag. She also was on the cover of Blum Magazine.

Who are some of the most beautiful Azerbaijani women?

Azerbaijani women have a unique beauty. Mixing Albanian, Persian, Arab, and Turkic bloodlines led to a unique facial structure and features. And the list could be endless. But I would like to share with you a list of not only beautiful but also great Azerbaijani women.

Mehseti Ganjavi (1098, Ganja – 1160) – the first Azerbaijani poet. She is a bright representative of the Islamic Renaissance, singing in her poems the images of the inhabitants of the quarter of urban artisans, poets, singers, and mutribs. She wrote in Persian (the language of poetry at the time). You need to understand how difficult it was for a woman in the Muslim East of the 12th century to be a poet.

Sara-Khatun (1401 – 1465) – a representative of the family that ruled the Ak-Koyunlu Turkoman confederation. She is known as the mother of Uzun-Hasan, under whom Ak-Koyunlu flourished, and as a successful and respected mediator in diplomatic negotiations.

Farah Pahlavi (born October 14, 1938, Tehran, Iran) – Dowager Empress of Iran, wife of Shah Mohammed Reza Pahlavi. Azerbaijani by origin. Of the three wives of the shah, she was the only one to be crowned empress (shahbanu). She was the first empress to be crowned in Iran since the Arab invasion in the 7th century. Two Sassanian empresses, Borandokht and Azarmedokht (circa 630), were the last to hold this title before her.

She was a deputy of the Milli Mejlis (parliament) of the III, IV, and V convocations (2005-2017); Member of the Political Council and Deputy Chairman of the ruling New Azerbaijan Party.

President of the Azerbaijan Gymnastics Federation, head of the working group on Azerbaijani-French inter-parliamentary relations, president of the Heydar Aliyev Foundation, and the Friends of Azerbaijan Culture Foundation; Goodwill Ambassador for UNESCO (2004) and ISESCO (2006), UN, OIC.

Well, I introduced you to several beautiful and great women of Azerbaijan.

All over the world, Austria women are known to be the sweetest and sexiest women on the planet, and this list will show that this last statement is absolutely accurate. Like women from other parts of the world, Austrian women are also quite passionate and caring.
1. Amina Dagi
2. Nadine Leopold
3. Anna F. Read More

one outstanding quality of these women is that they age quite well, you may not be able to tell the age of some very old women. So let’s quickly move on to the list of the 7 most beautiful Colombian women.
7. Lucía Aldana – Colombian model
6. Catalina Otalvaro
5. Zulay Henao – Colombian-American film actress…. Read More

Albania is a beautiful country in the Balkan Peninsula. Do you know that Mother Teresa, though born in the then-ottoman Empire, was an Albanian? Nod and smile also have a different meaning here. If people shake their head it means yes, and if they nod that means no.
1. Amanda Lajcaj
2. Emina Cunmulaj… Read More